7 Books I Love That Have Been Challenged #bannedbooksweek 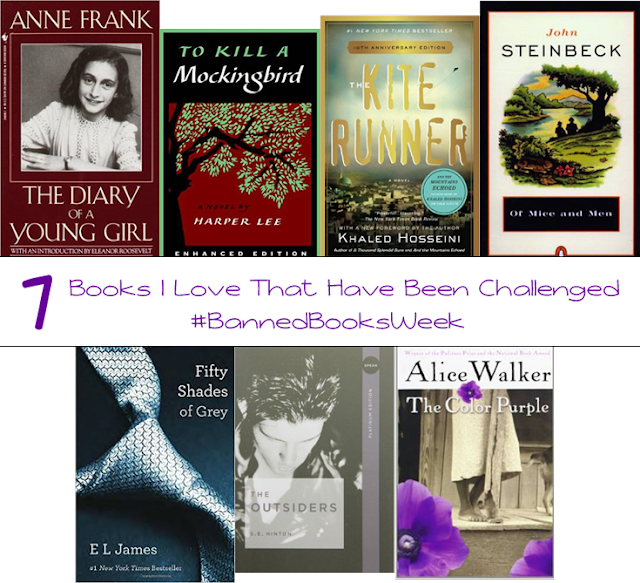 In honor of Banned Book Week (Sept. 27- Oct.3), I wanted to take the time to share some of my favorite reads with y'all.  These books are highly challenged (and sometimes banned) due to content found offensive.  Some of the reasons for these books being challenged & banned are:
I am an avid supporter of the freedom of expression through writing.  Not everyone will agree with everyone's writings but that does not mean that it should be banned.  Monitored for age appropriateness, maybe.  It is a parent's right to decide what their child reads, after all.  But banning a book from an entire public library because a group of individuals do not agree with it's content... that goes against the personal rights that my husband & his "brother-in-arms" fought protecting.

Below you'll find 7 of my favorite books that have been challenged/banned.  I've included a little about each book, why they were challenged/banned, & a link to Amazon in case you wish to see what all the fuss is about. *I must inform you that the Amazon links are affiliate links. Meaning, I get a small payment as a result of you purchasing through those links.*

The Diary of a Young Girl

by Anne Frank:  This well known autobiography is that of a 13 year old Jewish girl during World War II.  Anne Frank paints a clear picture of how life was for her & 7 others as they hid from the Nazis inside of a hidden Amsterdam Annex for 2 years.
I read this emotional diary when I was in middle or high school.  It is still one of the most profound pieces of literature that I have ever read.  And to be honest, I will be adding it to my "re-read" list after this post has gone live.  It's time I revisit this young girl's life.
Some reasons for this book being challenged/banned:  Sexually Offensive Passages, Sexual Material, & Homosexual Themes

To Kill a Mockingbird

by Harper Lee:  Written by a young woman from Alabama, this book covers all sorts of topics.  Cruelty, Love, Kindness, & Justice are just a few adult subjects that are expressed through the eyes of 8 year old Scout Finch.  As we follow her for 3 years, while her father (a lawyer) defends a black man wrongly accused of a horrible crime, we also get to know her brother Jem & their friend Dill Harris.
It has been some years since I read this book.  However, I remember many parts as if it were yesterday.  I can also remember how Harper Lee is able to take you from your seat & place you right into the story.  This is another classic read that will soon be added to my bookcase.
Some reasons for this book being challenged/banned:  Racial Slurs, Offensive Language, & Depiction of Attempted Rape

by Khalid Hosseini:  This novel is both powerful & heartbreaking.  Hosseini writes about the friendship between a wealthy boy & the son of one his father's servants over 30 years in Afghanistan.  Love, Sacrifice, Friendship, Family, & Betrayal are just some of the dynamic topics covered throughout this "fairly new" classic.
After reading this book, I quickly recommended it to my Aunt Nancy.  This is an honor that I only instill to the best of the best books that I read.  As I expected, she gave it her seal of approval as well!  It truly is a powerful piece of writing.  Especially for a debut novel.
Some reasons for this book being challenged/banned:  Violence & Sexual Situations

Of Mice and Men

by John Steinbeck:  This short but profound classic is the tale of George & Lennie.  Both are migrant workers who share the same American dream.  However, Lennie is unaware of his own strength due to his childlike mind.  George take on the challenge of trying to protect Lennie after the gentle giant gets into trouble with the boss of a ranch they are working.
I can remember reading this book & watching the movie during class in school.  There were parts that made us both laugh & cry.  It may be a short book but it is a mighty powerful 100 or so pages.  And if I remember correctly, the book & the movie are VERY similar.  If not identical.  I recommend either format but I warn you: have tissue handy!
Some reasons for this book being challenged/banned:  Profanity, Blasphemy, "Anti Business Attitudes", "Questionable Patriotism", "Morbid & Depressing Themes, & Racism

by S.E. Hinton:  Written by Hinton when she was only 16, this book is about Ponyboy, his brothers, & friends.  Ponyboy sees the world as having two groups of people.  The greasers who are always considered outsiders & always have to watch each others' backs.  Then there are the Socs.  These are the wealthy kids who manage to get away with everything.  However, when one of his friends kills a soc during a "rumble", Ponyboy begins to see things differently.
This is another book that I read in Middle School.  It also happens to be one of the only books that my sister has EVER read. (lol)  She loved is so much that she actually kept the school copy instead of turning it in. (shhh... don't tell.)  It was this same copy that I read & fell in love with.  It was also S.E. Hinton that helped me realize that becoming a writer is possible no matter your age.
Some reasons for this book being challenged/banned: Glamorizing Drug & Alcohol Abuse, Gangs, Gang Violence, & because "Virtually all the characters were from broken homes"

by Alice Walker:  This frequently challenged book takes place mostly rural Georgia & address numerous issues faced by women of color.  Particularly two sisters, Celie & Nettie.  This novel has also been made into a play, a movie, & even a radio adaptation.
Like many of the others on this list, it has been a while since I've read this book.  In all honesty, most of the details of this book are cloudy or have vanished from my mind.  This just means that I want to add it to my "re-read" list because I know that it was a book that I enjoyed the first time around.  It's just time for me to remind myself of all the reasons of why!
Some reasons for this book being challenged/banned:  Sexual & Social Explicitness, because it's Smut, "Troubling ideas about race, man's relationship to God, African history, & Human sexuality", Vulgar Content, & thought to be X-rated

What is your opinion on the banning of books?
Have you read any of these listed above?