If you follow me on Twitter, you may have noticed that one of my favorite reads is:
The Wrath & the Dawn by Renee Ahdieh 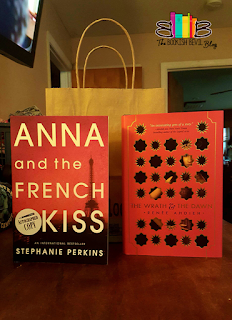 I had heard a great deal of hype about the book before picking it up at my local library to read.  But it wasn't until after I read Renee's bio in the back, that I found out that she actually lives near by in Charlotte.  So, not only did I fall in love with her book but I have mad admiration for her because she is a local writer whose debut novel totally rocked the community.  It's become such a success!  I find true inspiration in this.

One day, I tweeted Renee & asked her where I could purchase my own copy of the book.  Specifically a signed copy.  She kindly replied that I could pick up a copy at Park Road Books in Charlotte.  The bookstore only being about 35 minutes from my house, I planned to eventually swing by.

It was around the same time that I found out that my 6 year old was going to have to get his tonsils removed.  How is this relevant?  His doctor just happens to be located on the same road as Park Road Books!!  Coincidence?  I think not!!  I do believe it was just meant to be.  Haha...  Anyways, I managed to swing by the bookstore after Seth's appointment but yeah, they were all out of signed copies (0_0)

I was kind of disappointed until one of the associates mentioned a panel event that was planned for the following weekend.  Renee Ahdieh would be there along with a few other authors.  Including Stephanie Perkins, author of Anna and the French Kiss <3  Even though I wouldn't be able to attend (sadly, I was busy) he said that they could get a copy signed & saved for me.  Of course I said yes.  He took my name & phone number.  I headed home empty handed...

Fast forward to yesterday.  The boys had early release from school due to parent/teacher conferences.  Instead of doing the conference thing (don't judge: I communicate enough daily) I picked the kids up & headed to Charlotte.  I paid for my signed copy of The Wrath & the Dawn and also picked up a signed copy of Anna and the French Kiss.  I haven't read it yet but I've been wanting to.

Having both of these books signed is clearly something to be excited about.  However, it actually gets much better than that.  When I got back to my car, I was pleasantly surprised to see that not only had Renee signed my copy of her book but she had personalized it as well!! It reads, "To Jessica- Make it a story worthy of you." Finding this sent me into a total Fangirl moment.  I was bragging to my husband over the phone yesterday & I'm still excited over it today.  It's my first personalized book & it means so much more to me than that.

So tell me...  Have you ever had a total Fangirl moment?
Who is one author you'd love to have a personalized book from?  I wanna know!

Email ThisBlogThis!Share to TwitterShare to FacebookShare to Pinterest
Labels: Fangirl, Renee Ahdieh, The Wrath & the Dawn