Happy New Year, everyone!!  I don't know about you but I can not believe that it's already 2016... It seems like just yesterday, it was the beginning of 2015.  Time should definitely slow down a bit.  Don't you agree??

I wanted to take some time to share, with y'all, a handful of my favorite reads from 2015.  Since I didn't launch this blog until later in the year, I don't have a review for all of the books I'm about to mention.  However, I still believe you need to know about all of my top favorites.  So, in no particular order, here are my top 5 Reads of 2015: 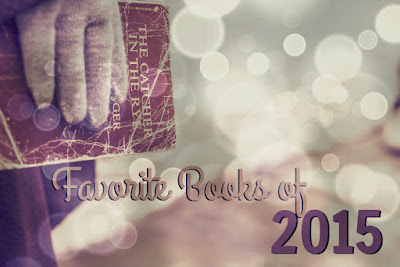 1. The "Blood & Roses" series by Callie Hart: I'm sharing this entire series because I sped through it in it's entirety. I enjoyed each and every book. This year, I plan on moving on to Callie Hart's "Dead Man's Ink" series. 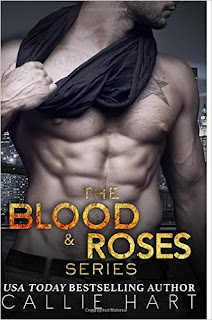 Series synopsis: "Zeth Mayfair's never been troubled by morals before. As one of Seattle's most dangerous, feared men, he's always carried out the jobs he's sent on without a second thought. Drugs? Guns? Dirty money? They're all fair game. But girls? Girls are another matter entirely. When Zeth's employer decides buying and selling kidnapped women is a lucrative sideline, Zeth's usually uncomplicated life suddenly becomes very complicated indeed. And his biggest complication goes by the name of Sloane Romera. As a trauma doctor at St. Peter's Hospital, Sloane's finger is hardly on the pulse of Seattle's underground crime scene. Her sister is missing and she needs to find her, yet all doors leading into the seedy world of human trafficking are firmly closed in Sloane's face. She needs information. What she really needs is help...and help presents itself in the most unlikely of forms. Zeth Mayfair is terrifying, scandalously hot, and comes fully loaded with a terrible attitude and wicked smile. He also looks like he's Sloane's only hope. Can she work with the guy without getting herself killed, losing her job, or falling head over heels in love? What happens in the dark never stays in the dark." -Courtesy of Amazon

2. Daughter of Smoke & Bone by Laini Taylor: I went into this one not knowing what to expect. However, I knew from the beginning that I was going to enjoy it. I look forward to reading the rest of the trilogy in 2016.

Synopsis: "Around the world, black handprints are appearing on doorways, scorched there by winged strangers who have crept through a slit in the sky. 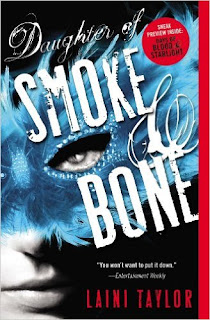 In a dark and dusty shop, a devil's supply of human teeth grown dangerously low.

And in the tangled lanes of Prague, a young art student is about to be caught up in a brutal otherwordly war.

Meet Karou. She fills her sketchbooks with monsters that may or may not be real; she's prone to disappearing on mysterious "errands"; she speaks many languages--not all of them human; and her bright blue hair actually grows out of her head that color. Who is she? That is the question that haunts her, and she's about to find out.

When one of the strangers--beautiful, haunted Akiva--fixes his fire-colored eyes on her in an alley in Marrakesh, the result is blood and starlight, secrets unveiled, and a star-crossed love whose roots drink deep of a violent past. But will Karou live to regret learning the truth about herself?" -Courtesy of Amazon

3. Not a Drop to Drink by Mindy McGinnis: This was the first Dystopian that I had ever read. It was such a great read. Take some time to check out my review & you will see just how much I love this book! I've added the companion novel, In a Handful of Dust to my 2016 TBR list. 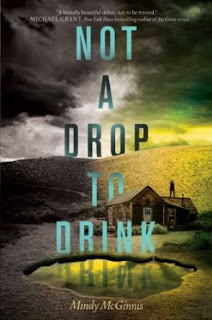 Synopsis: "Fans of classic frontier survival stories, as well as readers of dystopian literature, will enjoy this futuristic story where water is worth more than gold. New York Times bestselling author Michael Grant says Not a Drop to Drink is a debut "not to be missed." With evocative, spare language and incredible drama, danger, and romance, Mindy McGinnis depicts one girl's journey in a frontierlike world not so different from our own.

Teenage Lynn has been taught to defend her pond against every threat: drought, a snowless winter, coyotes, and most important, people looking for a drink. She makes sure anyone who comes near the pond leaves thirsty—or doesn't leave at all. Confident in her own abilities, Lynn has no use for the world beyond the nearby fields and forest. But when strangers appear, the mysterious footprints by the pond, nighttime threats, and gunshots make it all too clear Lynn has exactly what they want, and they won't stop until they get it...." - Courtesy of Amazon

4. The Wrath and the Dawn by Renee Ahdieh: This book is the first that I ever reviewed. However, I plan on doing a new review sometime this year because I feel that my original doesn't do it enough justice. I'll probably re-read it & write a new review once the next book (The Rose and the Dagger) is released in May of this year. 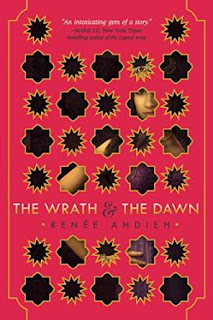 Synopsis:Every dawn brings horror to a different family in a land ruled by a killer. Khalid, the eighteen-year-old Caliph of Khorasan, takes a new bride each night only to have her executed at sunrise. So it is a suspicious surprise when sixteen-year-old Shahrzad volunteers to marry Khalid. But she does so with a clever plan to stay alive and exact revenge on the Caliph for the murder of her best friend and countless other girls. Shazi’s wit and will, indeed, get her through to the dawn that no others have seen, but with a catch . . . she’s falling in love with the very boy who killed her dearest friend.

She discovers that the murderous boy-king is not all that he seems and neither are the deaths of so many girls. Shazi is determined to uncover the reason for the murders and to break the cycle once and for all." -Courtesy of Amazon

5. Crave & Sinful by Jennifer Dawson: These are the first two books in the "Undone" series by Jennifer Dawson. I absolutely loved them both. There's a third book coming out later this year & I'm so excited! It's release date can not get here fast enough. 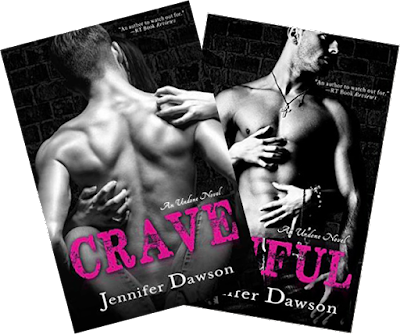 I used to be a nice, normal girl. I had dreams. Good, happy dreams of a white picket fence, 2.5 kids, and a fairytale love that lasts forever. Nobody ever warned me that sometimes, the prince dies three weeks before the wedding.

Like any addict, I swear this time is the last….

Now, I go through my days, a shadow of my former self. I pretend I’m okay, and the people in my life pretend to believe me. But, sometimes, when I can no longer stand the craving, I roam an underground sex club looking for my next hit. It’s dirty and wrong, but I can’t stop, and my only line of defense between them and me, are the rules I’ve designed to keep me safe. Men always abide by my rules. Until I meet him.

I don’t question the instincts that tell me to run. One look at him, standing there, power radiating off him in waves, tells me all I need to know. He will make me crave those happy dreams I’ve left behind. And that is not an option."

Sinful
"I’ve wanted my brother’s best friend, Leo Santoro, for too many years to count.
No matter what I do, he won’t confront the attraction that burns between us.
It’s time to put him behind me once and for all.
I have no choice but to call his bluff.
And then I will walk away.

The last woman I should want is my best friend’s baby sister, Jillian Banks.
No matter what I do, she won’t ignore the attraction that burns between us.
It’s time she learns the real me.
The only promise I can make is that her fantasies are no match for reality.
And then I’ll watch her walk away."
Posted by Bookish Bevil at 6:00:00 AM