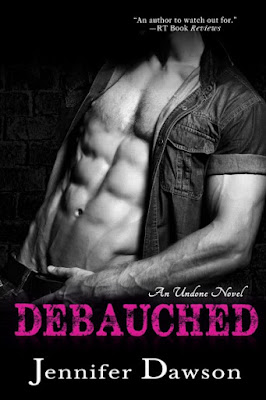 Check it out on: Goodreads

One night in a moment of sheer madness I confessed my secrets to him. All my life I’ve been pretending. Pretending to be the woman I thought I should be instead of the woman I really am. I’ve been faking it and I am good. No one has ever guessed. Except him. He just looked at me and knew.

Chad Fellows is not the man I want, but he’s fast becoming the man I need.

One night in a moment of sheer madness I held her in my arms and let her cry. I did the right thing, letting her walk away, no matter how much she calls to the part of me that wants to rescue her. We are nothing alike, and she’s a mess of complications in a life I’m trying to keep simple. But then I touched her and made her tremble and now I can’t turn away. 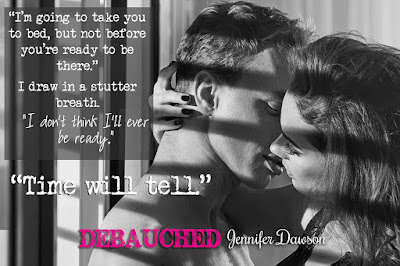 As many of you know, I am a HUGE fan of the "Undone" series by Jennifer Dawson.  I have followed the stories of Layla & Michael in Crave, Leo & Jillian in Sinful, and now Chad & Ruby in Debauched. And this book picks up after Chad & Ruby's encounter in the novella Unraveled.

I have never been disappointed by Jennifer Dawson's story line and this was no different.  Debauched is a wonderfully steamy story.  It tells a story of how two seemingly different people, just may have been made for one another.

Ruby Stiles is a woman that I found myself relating to.  Don't get me wrong, I love both Layla & Jillian as female characters but with Ruby, the ways I could relate to her were numerous.  As far as Chad Fellows goes, he is definitely the perfect dominate male (in my opinion).  Clean cut & straight laced on the outside but oh boy... looks can be deceiving. In a wonderful way, of course.

Jennifer Dawson is the author of the popular Something New series; spicy, small town romance released with Kensington, and pens the dark and edgy contemporary romance series Undone.    Jennifer grew up in the suburbs of Chicago and graduated from DePaul University with a degree in psychology. She met her husband at the public library while they were studying. To this day, she still maintains she was NOT checking him out. Now, over twenty years later, they are married and living in a suburb right outside of Chicago with two awesome kids and a crazy dog. These days Jennifer can be found sitting behind her computer, writing her next novel, chasing after her kids, keeping an ever-watchful eye on her ever-growing to-do list, and NOT checking out her husband. Jennifer loves connecting with her readers and invites you to check out her website, Facebook page, and join Dawson’s Darlings, her private Facebook Fan group. Sign up for her monthly Newsletter for exclusive insider peeks, new release information and more.