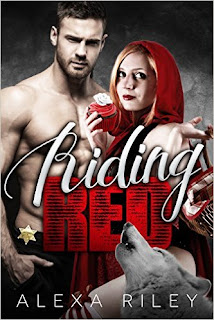 Gray Ridge, Colorado is a quiet town, but this Halloween there's a mating moon, and the shifters' need to breed their fated mates runs strong.

Ruby is the proud owner of Red's Goodie Basket, and as the new girl in town, she's looking for business. But when the local sexy sheriff, Dominic Wolfe, keeps the customers away, she finds it's hard to stay mad when burning with desire.

Dominic is a shifter, and his wolf wants Ruby. Since the second he laid eyes on her, he's been fighting the need to mark her as his. But when the mating moon is full, he won't be able to control his wolf any longer.

Tricks and treats are the last things on his mind when the mating heat takes over, and his obsession is put to the test.

Warning: This story is a sexy twist on a classic fairy tale, complete with a red cape, a basket of goodies, and a hungry wolf. It's written to make you smile, turn you on, and help you celebrate Halloween!

To say that this book is different is a total understatement.  The mating ritual of the shifters in this book is unlike anything I have ever read... But I guess it works with the story line.

I was fond of Dominic's character but there were times that I felt as if I would've liked a different main female character.  Ruby just wasn't my favorite.

Even though I am a fan of Alexa Riley, there have been a couple books that I just wasn't that fond of.  This one lies somewhere in-between the ones I have enjoyed & the ones that couldn't even finish.

Overall, I didn't really have specific expectations going into this book.  This being said- I give it a rating of 3 sexy lips.