The Lost Slipper by Alexa Riley 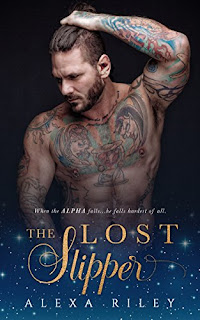 The Lost Slipper by Alexa Riley

When the alpha falls... He falls hardest of all.

The first time Stone saw Winnie, she was alone in the woods with no memory of where she came from.

With one look, he knew something was different. When she finally came of age and her mating heat kicked in, he realized that she had always been the one.

Sent to live with a strange family, Winnie was forced to deal with the hateful treatment of her stepmother and stepsisters.

Mating the alpha changed that.

But when her past comes back to find her, will the heat last after the clock strikes midnight?

Warning: This shifter fairy tale is meant to be enjoyed by only those who love this kind of adorable stuff. Think you've got what it takes? Then come on in!

As the third book in the 'Fairytale Shifter' series, The Lost Slipper can be read as a standalone or as part of the overall series.  I've read the series in order from the beginning & I have to say- they keep getting better.  (Be sure to also check out my reviews of Riding Red & Beauty Sleeps)

The Lost Slipper is a quick read with a Cinderella influence.  The influence isn't a main focus but it does play a large role.  Notice I said that it was a 'quick' read...  It definitely stays true to the Alexa Riley form.  I believe I finished this book in one sitting.  No complaints though.  Even though it was a short read, it was still well done.

Since this is the third book in the series, I've grown familiar with a majority of the characters.  I was, however, glad to get to know more about Winnie (the main female character).  I've been curious about her past & what her future held.  Stone, the alpha (and main male character) isn't too bad on the imagination either.

Overall, I enjoyed this book.  It quickly moved up to the top of my list as series favorite.  With that being said- I gave it a rating of 4.5 hot lips.