And I Darken by Kiersten White

And I Darken by Kiersten White 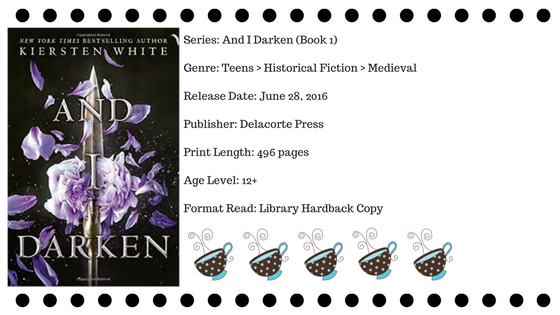 "NO ONE EXPECTS A PRINCESS TO BE BRUTAL. And Lada Dragwlya likes it that way. Ever since she and her gentle younger brother, Radu, were wrenched from their homeland of Wallachia and abandoned by their father to be raised in the Ottoman courts, Lada has known that being ruthless is the key to survival. She and Radu are doomed to act as pawns in a vicious game, an unseen sword hovering over their every move. For the lineage that makes them special also makes them targets.

Lada despises the Ottomans and bides her time, planning her vengeance for the day when she can return to Wallachia and claim her birthright. Radu longs only for a place where he feels safe. And when they meet Mehmed, the defiant and lonely son of the sultan, who’s expected to rule a nation, Radu feels that he’s made a true friend—and Lada wonders if she’s finally found someone worthy of her passion.

But Mehmed is heir to the very empire that Lada has sworn to fight against—and that Radu now considers home. Together, Lada, Radu, and Mehmed form a toxic triangle that strains the bonds of love and loyalty to the breaking point.

From New York Times bestselling author Kiersten White comes the first book in a dark, sweeping new series in which heads will roll, bodies will be impaled . . . and hearts will be broken."

Oh man! Let me just say that I read this book in it's entirety in less than 4 days! Now, if that doesn't tell you something-- I don't know what else will. This story was full of twists & turns. One minute I was loving the newly introduced character, only to be shocked later down the road. Other times I hated a specific character to only fall in love with them along the way. This novel will definitely test your ability to trust your own character judgement.

If I'm going to be honest, I have to make a confession- I kept waiting for this book to become long & drawn out. But you know what... it never did. Every new scene brought something more exciting than the next. Numerous times I found myself genuinely surprised by what was happening. This definitely made for a fun (& emotional) read.

With all this praise, you're probably thinking... "Okay Jessica. There has to be something that you did not like about this book." You're exactly right. There is one thing that has me feeling urked- I have to wait until June 2017 for the second book in the trilogy! Yeap- this gem is the first of a series (which I somehow missed). Guess whose setting a countdown clock for book two (Now I Rise). Come on June 2017!