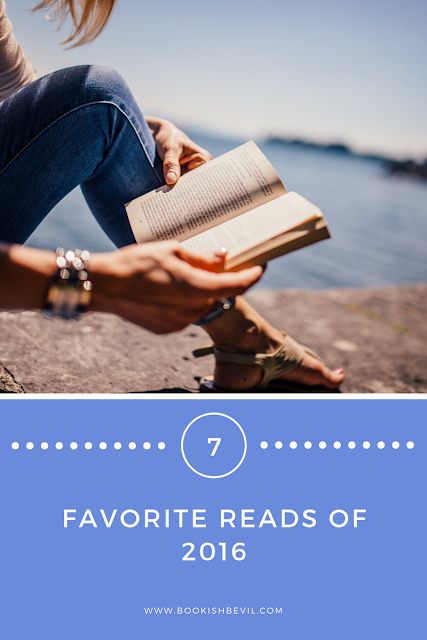 Well folks, it's that time of year again. 2017 is among us & I don't know about you but I'm taking these first few days to think back, regroup, & plan for an awesome year.

I have to admit, I may not have reached my 2016 Goodreads Goal this year but I feel that I still kicked a$$ where reading is concerned.

Here's a quick rundown of my 2016 reading achievements:

Actually discovered a couple Non-Fiction books that I enjoyed. Even though 1 of them was a children's books. (The Missing Kennedy & Ruger Tails: Ruger Finds a Home)

Started reviewing book related subscription boxes. And so far, I have come in contact with two different ones that you should really check out. (Bookcase.Club & The Book Drop)

Shared 21 book reviews with y'all. That's right- 21 amazing reviews shared. Check out my overall 'Book Reviews' list to see what all I've shared since beginning this blog.

Started a Pinterest group board for book reviews. I look forward to watching it's growth throughout the new year. If you want to join, just let me know your Pinterest name or email below.


What were some of your 2016 Reading Achievements?

*(Find my past book reviews via my 'Reviews' page & also, this post contains affiliate links)*

1. Calico by Callie Hart: This full length standalone novel was everything I've grown to expect of Callie Hart... and so much MORE! Not to mention- look at that cover?! After reading it on my Kindle, I've definitely added it to my list of books to purchase for my shelf. And trust me- you should too! Synopsis: Coralie Twelve years ago, I ran to stay alive. Port Royal, South Carolina, was my home. I was born there. I fell in love there. And I nearly died there. I never thought I’d go back. Now, after so many years, I have to return to bury the man who made my life a living hell. Some nights, I used to cry myself to sleep, praying my father would die. Other nights were different. Other nights, there was him. Callan Cross. My first confidante. My first kiss. My first love. My first everything: Callan was the glue that held me together when everything else was falling apart. He was my savior. He was there for me whenever I needed him… Until he wasn’t. Every night, I’ve seen the love of my life in my sleep. I just never thought I’d have to face him again. Callan Twelve years ago, I f*#@ed up big time. Living life through a camera lens is sometimes easier than dealing with it head on. Scratch that. It’s always easier. For over a decade, I’ve been a master of my art, taking photographs all over the world. Yet despite all of the countries I’ve visited, the amazing things I’ve seen, the beautiful women I’ve screwed, my heart has remained in pieces. Coralie’s the only woman I’ve ever loved, will ever love. And I’m determined to show her that we’re meant to be together. Even if it means unearthing the bones of the past in the process. A lifetime and a thousand miles have stood between us. Now, there’s no length of time I won’t wait, no distance I won’t travel, in order to make her mine.

2. And I Darken by Kiersten White: Having heard this book mentioned a few times on 'Booktube', I decided to take the time to check it out from my local library. It's a hefty book that can be intimidating at first glance. Once I started reading though- I was hooked. I mean... I could not put it down. 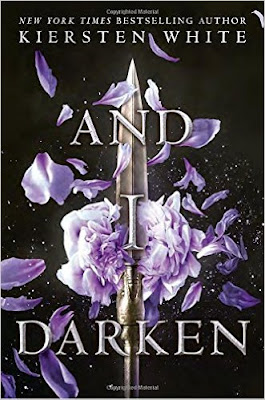 Synopsis: NO ONE EXPECTS A PRINCESS TO BE BRUTAL. And Lada Dragwlya likes it that way. Ever since she and her gentle younger brother, Radu, were wrenched from their homeland of Wallachia and abandoned by their father to be raised in the Ottoman courts, Lada has known that being ruthless is the key to survival. She and Radu are doomed to act as pawns in a vicious game, an unseen sword hovering over their every move. For the lineage that makes them special also makes them targets.

Lada despises the Ottomans and bides her time, planning her vengeance for the day when she can return to Wallachia and claim her birthright. Radu longs only for a place where he feels safe. And when they meet Mehmed, the defiant and lonely son of the sultan, who’s expected to rule a nation, Radu feels that he’s made a true friend—and Lada wonders if she’s finally found someone worthy of her passion.

But Mehmed is heir to the very empire that Lada has sworn to fight against—and that Radu now considers home. Together, Lada, Radu, and Mehmed form a toxic triangle that strains the bonds of love and loyalty to the breaking point.

3. The Diviners by Libba Bray: I shared in my review of this book that I actually did not read it right away. It actually sat on my shelf f.o.r.e.v.e.r before I made myself sit down & start reading. (I'm a bad procrastinator) Once I started reading though... I just could not put it down! 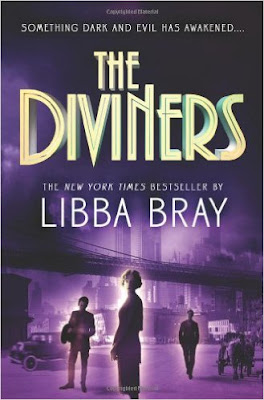 Synopsis: Do you believe there are ghosts and demons and Diviners among us?

Evie O'Neill has been exiled from her boring old hometown and shipped off to the bustling streets of New York City--and she is pos-i-tute-ly ecstatic. It's 1926, and New York is filled with speakeasies, Ziegfield girls, and rakish pickpockets. The only catch is that she has to live with her Uncle Will and his unhealthy obsession with the occult.

Evie worries he'll discover her darkest secret: a supernatural power that has only brought her trouble so far. But when the police find a murdered girl branded with a cryptic symbol and Will is called to the scene, Evie realizes her gift could help catch a serial killer.

As Evie jumps headlong into a dance with a murderer, other stories unfold in the city that never sleeps. A young man named Memphis is caught between two worlds. A chorus girl named Theta is running from her past. A student named Jericho hides a shocking secret. And unknown to all, something dark and evil has awakened....

4. White Hot Kiss by Jennifer L. Armentrout: This is another book that I had heard numerous people talking about for a few months. I found it at my local library one day and figured, 'What the heck?' & picked it up. It took me a little while but by the end, I was hooked. 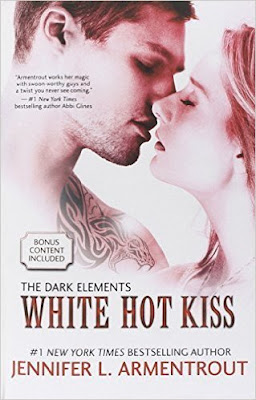 Synopsis: Some loves will last 'til your dying breath
Every choice has consequences—but seventeen-year-old Layla faces tougher choices than most. Light or darkness. Wickedly sexy demon prince Roth, or Zayne, the gorgeous, protective Warden she never thought could be hers. Hardest of all, Layla has to decide which side of herself to trust.
Layla has a new problem, too. A Lilin—the deadliest of demons—has been unleashed, wreaking havoc on those around her…including her best friend. To keep Sam from a fate much, much worse than death, Layla must strike a deal with the enemy while saving her city—and her race—from destruction.
Torn between two worlds and two different boys, Layla has no certainties, least of all survival, especially when an old bargain comes back to haunt them all. But sometimes, when secrets are everywhere and the truth seems unknowable, you have to listen to your heart, pick a side—and then fight like hell…

5. Dream Thieves by Maggie Stiefvater: After enjoying 'The Raven Boys' (first in the Raven Cycle series) I decided to continue with this second book. I've heard that this is actually the best out of the 4 in the series. I'm yet to read the other 2 but as of right now- I have to agree with the popular vote. I loved this book! 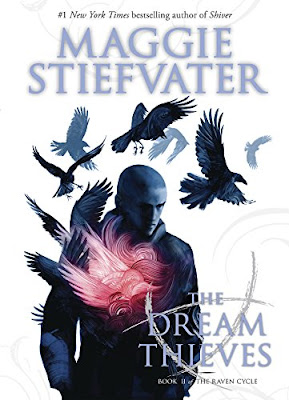 Synopsis: If you could steal things from dreams, what would you take?

One secret: Ronan can bring things out of his dreams.

And sometimes he's not the only one who wants those things.

Ronan is one of the raven boys - a group of friends, practically brothers, searching for a dead king named Glendower, who they think is hidden somewhere in the hills by their elite private school, Aglionby Academy. The path to Glendower has long lived as an undercurrent beneath town. But now, like Ronan's secrets, it is beginning to rise to the surface - changing everything in its wake.

6. Because You'll Never Meet Me by Leah Thomas: If we're being completely honest here, I have to admit that this was a complete 'cover buy'. Even though technically I just checked it out from my library. I knew nothing about the book & chose it solely on the cover. And boy am I glad I did. 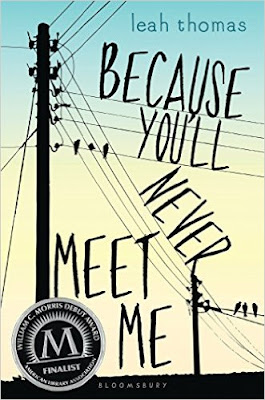 Synopsis: Ollie and Moritz are best friends, but they can never meet. Ollie has a life-threatening allergy to electricity, and Moritz's weak heart requires a pacemaker. If they ever did meet, they could both die. Living as recluses from society, the boys develop a fierce bond through letters that become a lifeline during dark times--as Ollie loses his only friend, Liz, to the normalcy of high school and Moritz deals with a bully set on destroying him. But when Moritz reveals the key to their shared, sinister past that began years ago in a mysterious German laboratory, their friendship faces a test neither one of them expected.


Narrated in letter form by Ollie and Moritz--two extraordinary new voices--this story of impossible friendship and hope under strange circumstances blends elements of science fiction with coming of age themes, in a humorous, dark, and ultimately inspiring tale is completely unforgettable.

7. Just Life by Neil Abramson: If you follow the blog regularly, you'll know that I recently named this book my favorite read of 2016. Not only was it's plot & characters written wonderfully but there were so many lessons intertwined within the story. I'll definitely remember this novel for years to come. 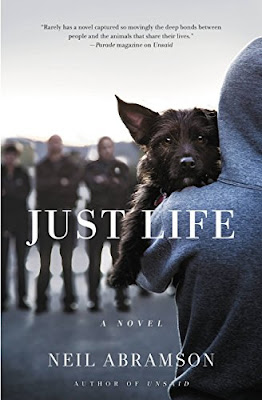 Synopsis: Veterinarian Samantha Lewis and her team are dedicated to providing a sanctuary for unwanted, abused, and abandoned dogs in New York City. But every day it gets harder to operate her no-kill shelter. Sam is already at her breaking point when she learns of an unidentified, dangerous virus spreading through their neighborhood. The medical community can only determine that animals are the carriers. Amid growing panic and a demand for immediate answers, suspicion abruptly falls on dogs as the source. Soon the governor is calling in the National Guard to enforce a quarantine--no dog may leave the area.

Samantha knows from her own painful history that, despite the lack of real evidence against the dogs, a quarantine may only be the beginning. As questions about the source of the virus mount and clash with the pressure for a politically expedient resolution, Sam is forced to make life-altering choices. She finds allies in a motley crew of New Yorkers--a local priest, a troubled teen, a smart-mouthed former psychologist, and a cop desperate to do the right thing--all looking for sanctuary from their own personal demons. But the person Sam needs the most to unravel the mystery of the virus and save the dogs is the last one she'd ever want to call on--because contacting him will mean confronting the traumatic past she has fought so hard to escape.