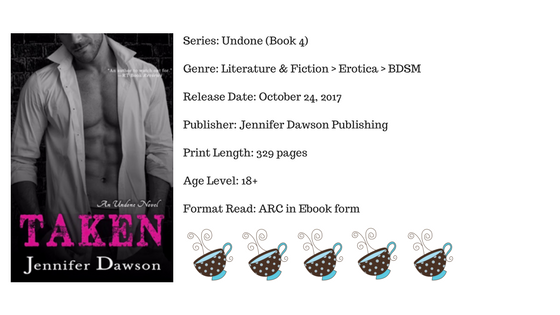 Rich, beautiful and entitled, once upon a time he was king of the trust fund babies. He took anything and anyone he wanted, until one day, he walked away without explanation. Now, he’s an untouchable mystery, one I’m determined to crack. And I’m not talking about anything mundane like his bed. No, I want something far more valuable.

I want into his head.

Veronica Westwood has blown into my life creating chaos in her wake, and I don’t know quite what to do with her. Rich, beautiful and entitled, she represents everything I’ve sworn off in life, and her being unexpectedly clever doesn’t change that. Instincts warn me to stay away, and that’s just what I intend to do, no matter her attempts to wear me down. I’m good at saying no, or at least I was until I met her. I don’t understand it, but she’s like a weakness, and a man like me can’t have weakness.

I simply won’t allow it.

Let me begin by saying that I am truly saddened by the ending of this series. As you can read in past reviews (I'll link those below), I have come to love each character that Dawson shares in this series. She has truly given me a group of friends that I will forever carry around in my heart. A group of friends that, like the main female character of this book, I'd love to have as my own.

This book, as with all the others, was one that I just couldn't put down. I was drawn back into this world as if I had never left. I loved it! Another thing that I love about this series is that even though each book covers a new set of characters, each book can still be read as a standalone. Reading them as an entire series simply paints a bigger world for you to immerse yourself into.

Taken (as well as the other books from the Undone series) can be purchased from:
Amazon | Barnes and Noble | iTunes | Kobo | Google Play

Check out my other Undone reviews by following the links below:
CRAVE // SINFUL // UNRAVELED (2.5) // DEBAUCHED